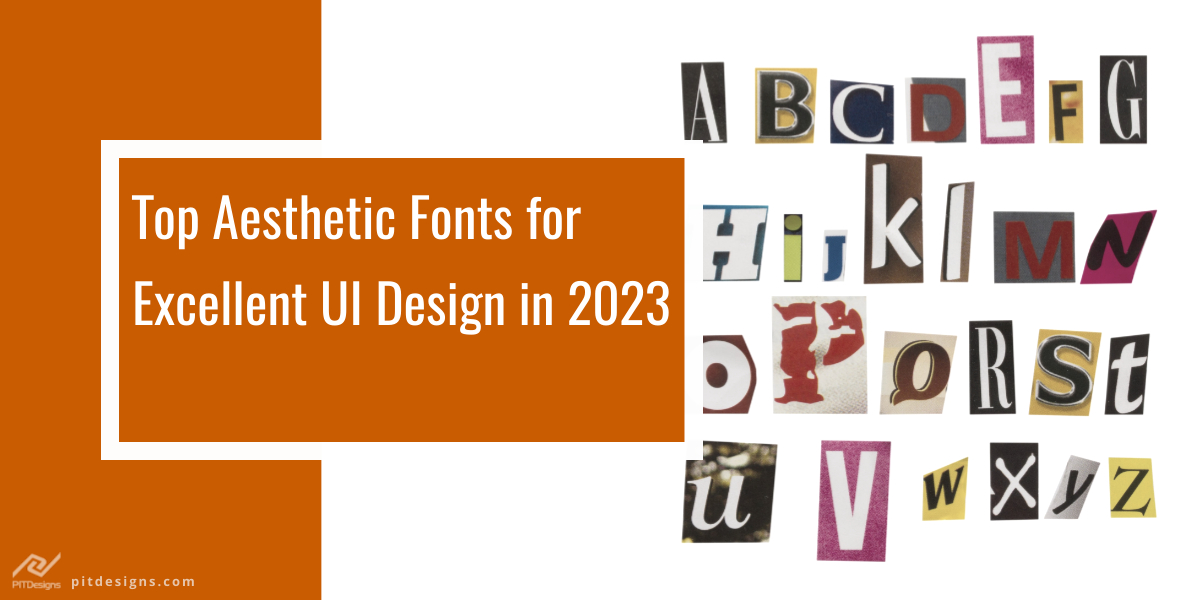 Aesthetic fonts are an essential design concept for creating a website ui design or a blog section. If you want to update your knowledge on what fonts are trending and what fonts are “in,” then you are at the right place.

Through this blog, we hope you learn about different fonts, their origin, and whether they are in trend or not. You can choose from various fonts, from Serif to Sans Serif, and much more. To come up with this list, we have written down every possible fantastic font to be used for your modernistic approaches.

It belongs to the powerful family of sans-serif fonts. Designed by Ellen Luff, this elegant font is used for many purposes, such as branding, logos, magazines, and movies. Bison is a fantastic font that can be used anywhere you wish- and is probably the best choice for branding work. One can feel the modernity when using this font. Basin is a perfect example of sophistication and boldness. It is not wrong to say that each font in the family is dynamic and proves a point of authoritativeness.

CoFo Sans is one of those fonts which represents different emotions properly. Known for balancing simplicity and personality- CoFo Sans appears easy to adapt. Designed by Maria Doreuli, this font is perfect if one needs to use it for proving a point by not a voice but just a font. We highly recommend this font to businesses looking to be understood by audiences most clearly and easily.

The name is so intriguing, Boke! Sure, it represents its name in an absolute manner. Boke! It is considered one of the limited editions. However, there are many designers, Boke! Does not use this font! Somehow managed to secure its place as a secure, bold sans serif typeface. This elite font was an outcome of the inspiration of the classic woodblock typeface. It's one of the most exclusive fonts; not everyone can access this font digitally.

Based entirely on a sans-serif typeface, Axiforma includes features such as localized forms, fractions, case-sensitive alternates, and old-style numbers. Highly recommended for display ads, posters, headlines, websites, and logotypes- this is one of the most lovable fonts to exist. Published by Galni Kastelov, this font comes in 20 weights and includes italics for each.

Rapor is the combination of sans serif and geometric foundation. Designed by Oguzhan Cengiz, this font comes with ten different weights ranging from extreme thin to black and also consists of twenty styles with similar italics.

The third refined version of the popular geometric sans serif, TT Norms Pro, was created to use it at a large scale. Designed by Ivan Gladkikh, TT Norms Pro can be used in heading (as large text arrays), with website headings, or on the web. The font is available in almost 67 different styles, out of which 33 are upright, 33 are italics, and one font is left as a variable.

Alfreda was designed and published by Santi Rey. One can use this font to display a gothic feeling, such as used on the occasion of Halloween. With more than 400 glyphs and a whooping 18 various stylistic sets, Alfreda can is mainly used for banners, web designs, etc. The font comes in six different weights.

Christian Schwartz designed the Graphik font in 2009. Inspired and born out of Kollektif font (another sans-serif typeface), Graphik is a vintage font used by many companies/businesses for projects, banners, etc.

Fonts signify what a company represents. You can understand the significance of different fonts if you have extensive knowledge. A misfit font can hamper the design entirely, and on the other hand, a font that is not popular or seen much around- if used elegantly can be considered appropriate.

Serif font is generally made up of tiny lines attached to letters.

Here is an example;

The idea to develop the Cotford font was first thought of in 2014 by Tom Foley. But during the lockdown, he served the desire to innovate, and Cotford developed. The prime vision behind innovating Cotford was to design a versatile and elegant serif typeface according to today's designer's requirements. The pandemic and solace of March 2022 finally pushed Tom Foley to give it in, and Cotford arrived.

When developing a new font, one of the biggest challenges that come across is that of maintaining the authentic self. Catford was taken on board by utilizing broad nib calligraphy and lettering sketches. As mentioned before, the real challenge was keeping the font's warmth and originality.

FS Ostro aims to strike a delicate balance between elegance and modernization. It is a typeface from Monotype that drips extraordinary appearance. FS Ostro was named after a very typical and southerly wind that blows over the mighty Mediterranean Sea.

As the name signifies, this font is also rooted in the 18-19th century tradition of French typefaces. New Paris can be distinguished from other fonts by its high contrast- the thick and thin strokes. Not to be considered a direct rival of the genre and designed to meet the modern advancements of today's times.

Written by Simon Walker, Lovechild is a display font in Jugendstil style. The name sounds so romantic. One is hoping the font will be romanticized in some manner. The font can boast 485 total glyphs, including foreign characters, making it compatible with dozens of foreign languages.

Crafted by Ellen Luff, Larken was designed to increase a sense of organic expressiveness. This font family was molded into organic curves and repetition of additional symbols. The character set has some stylistic, creative, and unique additional symbols.

The name of this font sure does sound complicated. Its founder Senti Rey was inspired by the Serif typefaces widely used in editorial media in the late 70s and 80s. The morphology of this font makes it an excellent choice for logos and headlines.

This font comes under a slightly modern ligature serif typeface that delivers a sense of uniqueness. Issam Boufelja designed this font – this font is a fantastic option for logos, watermarks, and invitations.

Hope you now know which fonts are trending and what can suit your project. There are other fonts to choose from- starting with harmony (free serif type), Eskool, Neue Metana, Shrimp, and many others. Each font is unique in its style and comes with extensive previous usage, which can give you an idea of how the font would appear.

What is the most aesthetically elegant font?

Below are some of the most aesthetically elegant fonts;

After doing research, some of the most popular fonts in 2023 are mentioned below:

Are there any major font types? What are they?

Yes, like any other field. Primary font type exists in the design industry. Some of them are mentioned below:

What is a font in graphic design?

In graphic design, a font is referred to the weights, widths, and styles of a typeface. Fonts are specifically about the width and height of a typeface. All typefaces have different font sizes.