Advantages and Disadvantages of Automation 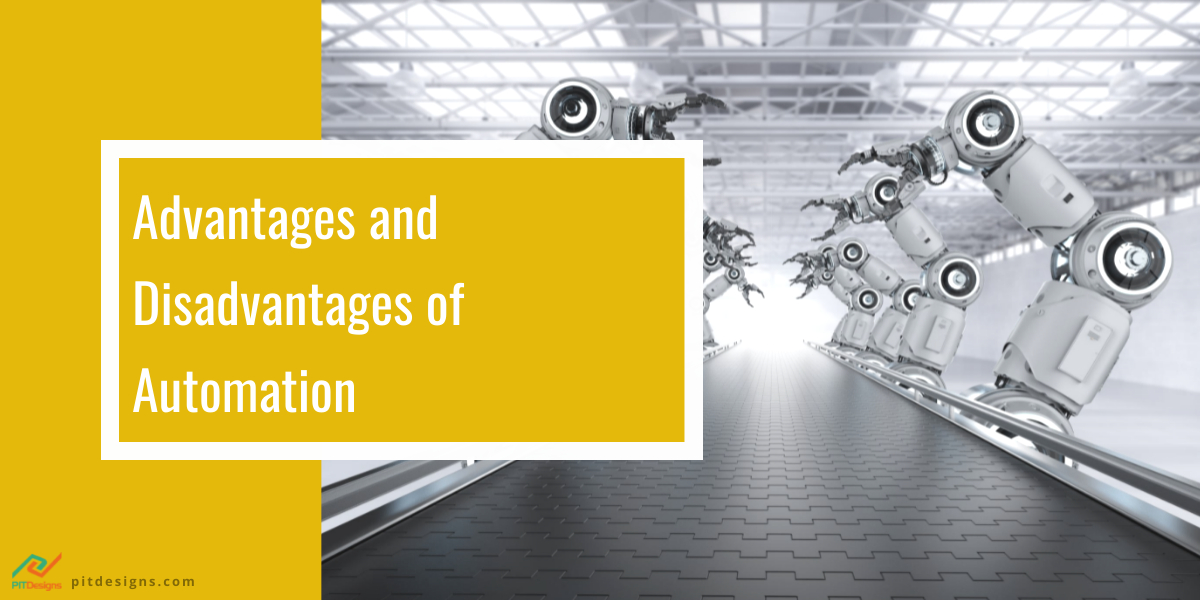 Automation is the use of a variety of tools, including software and computer programs, to perform repetitive tasks. The idea behind this expression is that the human brain will have more time for creative pursuits if technology can handle tedious jobs.

Automation is the process of carrying out a task using machines as opposed to human aid. Businesses in a range of industries, including manufacturing, can profit from automation.

Automating specific operations can also save time and money when it comes to marketing. For example,  A python developer may use python to automate tasks.

There are mainly three types of automation:

In this sort of automation, the production process is kept constant by the way it is set up, following a predetermined order of automated procedures.

Due to the equipment needed, fixed automation can initially be more expensive to set up, but it offers high production rates.

For many businesses that employ automation to produce food goods of a certain type and version, this is comparatively advantageous. It enables them to efficiently make that product and package it in large quantities.

For example, Freight Automation or goods carrier companies can utilise this to get maximum load bookings and positively impact the logistics industry.

Production machinery and automation may be modified to meet changing needs thanks to programmable automation.

This is accomplished by using software to command the automation, which can be coded in specific ways to modify the automation's sequence.

Manufacturers of many food varieties frequently use this form of automation. This enables them to produce one product in batches of a few dozen to perhaps thousands at once.

It only has to be reprogrammed if the product needs to be changed. Like in many grocery store there’s automation systems to regularize things and keep track of.

This automation, often referred to as soft automation, is somewhat more challenging than programmable automation but is related to it.

In essence, flexible automation makes it possible to produce a variety of items without wasting time on reprogramming.

Without needing to segregate the goods into distinct batches, as is necessary in batch manufacturing, a flexible automation system may efficiently generate a variety of product combinations.

Advantages and Disadvantages of Automation

There are several Advantages and Disadvantages of Automation. Let’s take a look at them!

Depending on the assignment, robots can complete the labor of three to five people.

Due to reduced heating requirements in automated operations, energy savings can be significant in addition to labour cost savings.

Improved Safety of the Workers

Workers are removed from hazardous jobs by automated cells. Your workers will be grateful that you protected them from the dangers of working in a factory.

Automation can maintain your process domestically, improve process control, and drastically reduce lead times, in contrast to outsourcing or sending your process overseas.

Automation solutions are based on your particular requirements and objectives and quickly pay for themselves thanks to lower operational costs, shorter lead times, higher productivity, and other factors.

You may reduce cycle times and cost per item while enhancing quality by using automated cells.

You can also compete more successfully on a global scale as a result. Because robots are flexible, you can retool a cell to surpass your competitors.

New product programming can be done offline without affecting current workflows, allowing for a quicker introduction of new goods into the production process.

Greater control and consistency in product quality are the outcomes of this.

It may not be gold, but it isn't cheap.

You must make a sizable initial investment for the machines to be installed in your factories or institutions. In addition, you will need to hire a specialist to manage the equipment and put aside a reasonable budget for maintenance.

You might consider using human labor to operate the business at some time, but always keep in mind that it's for the best.

Since robots and machines can take the place of any work, unemployment may become a significant problem in the future.

However, you can always think of it this way: Although the concept of the "survival of the fittest" may be outdated, as long as people use their intellect, they will find methods to survive and thrive on this planet.

Large industrial gear can be difficult to maintain. You'll need a sizable portion of your business budget to purchase and maintain the equipment.

Let's imagine you recently purchased a new machine for your clothing factory.

For about a year, everything has been running properly when all of a sudden, the machine stops functioning. You are clueless as to what went wrong.

You are correct; you will require a qualified analyst and repairman for that. That's also not a cheap item.

To Wrap It Up!

Despite the setbacks, this technology can produce consequential usefulness for the future if employed efficiently and intelligently.

Humans can be liberated from monotonous, dangerous, and unpleasant labour.

Additionally, there is a chance that developing social and economic conditions may allow people to live better lives and have higher living standards thanks to future automation technology.